Gazebos offer protection from all kinds of weather conditions in summer or winter, so it sounds really convenient to leave it up indefinitely simply. However, is it safe to keep your gazebo up all year?

Keeping a gazebo up all year is generally possible, but there are a few factors to consider. The materials that the gazebo is made of can affect its ability to withstand harsh weather conditions. The location of the gazebo and its intended use should also be taken into account.

I’ve spent many days on the beach lounging under a gazebo or reading a book in my backyard under the shade of a gazebo. Trust me, I know a thing or two about gazebos. This article looks at how you can keep your gazebo up as long as possible without damaging it.

Keeping your gazebo up during summer and taking it down during winter is the safest bet. Although you should still use as much protection as possible, so we’ve made it easier for you and compiled some must-have products.

Products needed to prolong the life of your pop-up gazebo:

1. Weight Bags– secures the gazebo to the ground.

3. Winter Cover– ideal if you don’t want to take it down for winter.

Gazebos are a common fixture across many yards across the United States, and they often elevate the whole garden. There are two main types of gazebos commonly seen.

The first is a temporary collapsible gazebo made of canvas material that can be taken down and put up within minutes. These gazebos are popular for camping, sporting events, beach days, or any other temporary event.

These gazebos are usually quite light and can be blown away by the wind relatively easily. To secure this gazebo to the ground, you can add weight bags to each foot. This added weight will make it more difficult for the wind to damage the gazebo. 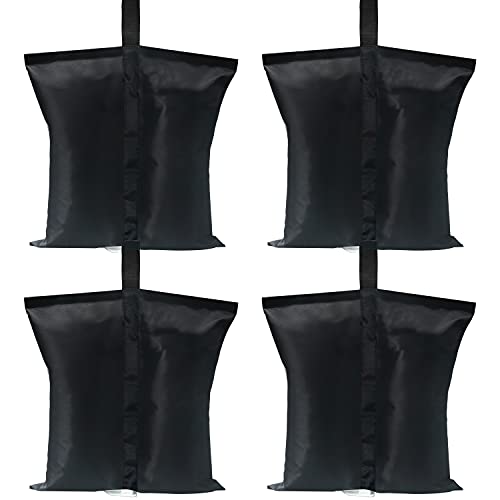 The second type of a gazebo is a permanent gazebo which is usually made of wood, steel, or vinyl. These gazebos are anchored to the ground to be a more permanent structure. They are designed to withstand most weather conditions and last for many years.

Depending on the size, location, and materials used for the gazebo, the price could even be slightly higher. If you plan on running electricity to your gazebo for lights, you should factor in electrician costs.

In the winter, we tend to spend less time in the backyard. This is merely due to the uncomfortable temperature and weather conditions in these months. So, to protect your gazebo, you can throw a winter cover over your gazebo.

If the winter temperatures and conditions in your area are not particularly brutal, it’s not necessary to use a cover – however, the protection will preserve the gazebo better for the season.

When to Take the Gazebo Down

If you have a temporary gazebo (pop-up gazebo) in your yard, it would be best to take it down as soon as the seasons change.

These gazebos are not designed to withstand extreme temperatures and weather conditions in winter. The material will most likely start to tear within a few months if left uncared for.

If you live in one of the southern states, like Florida, which does not have extreme winters – you could leave your pop-up gazebo up year-round. However, the harsh and relentless sun will most likely also damage the canvas material.

These gazebos are designed to be used when needed. When you do not need the gazebo, you should take it down and store it in a cool and dry space.

A pop-up gazebo is not linked to one single season since it can be used in any season to protect you from nature’s elements (rain, sunshine, or wind).

Pop-up gazebos are most popular during the summer months. If you don’t have any shade in your yard, it seems like the perfect solution to put up a gazebo and anchor it in for the whole summer.

Nothing stops you from leaving your gazebo up all summer except the harsh sun rays. Just like we need to wear sunscreen to protect our skin from sun rays, your gazebo also needs protection.

To protect the fabric of your gazebo, you can use a UV protectant and waterproofing spray, which greatly prolongs the life of your gazebo fabric.

We also suggest adding weights to the feet of your gazebo to secure it to the ground even better.

You would need to take your pop-up gazebo down during the winter months. Depending on the conditions in the region that you reside in, winter could seriously damage your gazebo.

Temporary gazebos are not designed to handle heavy snowfall or below-freezing temperatures.

If you have a permanent gazebo made of wood, steel or any other sturdy material and the gazebo is anchored to the ground – it should be safe throughout winter.

These gazebos are better equipped and designed to handle winter conditions.

Technically, you can keep your pop-up gazebo up year-round if you want. However, we would not recommend it since it will greatly reduce the lifespan of your gazebo.

I’m Kylo, a writer and researcher from Cape Town, South Africa. I like to help people learn new things, so I got my bachelor's degree in education. When I’m not writing, I’m probably playing piano or listening to classic FM unironically. Gazebos are becoming more and more popular among new and old homeowners. If you’ve ever had an extra car… Being worried about the safety of your gazebo during high winds is a completely valid concern. Besides, sometimes these… Building a Gazebo in your backyard certainly has its pros. A spot of shade in your yard, a beautiful… Relaxing in your backyard under a gazebo sounds like a dream until you hear a thunder crack. You might…

Gazebos add a lot of character to a yard or garden, but some are not built to be very…